Performing his 1-man klezmer concert for Temple Beth Shalom of Indio, CA, Gary Gould follows up a number played on a traditional Irish penny whistle with this selection performed on his untraditional "Jewish penny whistle." Special thanks to Danial Bingamon and Jubilee Music Instruments of Kings Mills, Ohio for his work on this very special whistle.
Posted by Steve at 2:07 AM No comments: 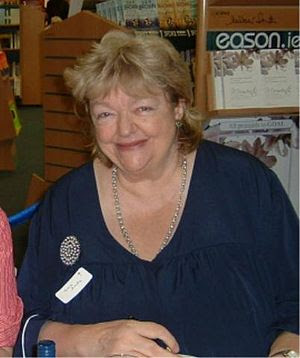 (Photo credit: Wikipedia)The life, love, talent and generosity of acclaimed best-selling novelist Maeve Binchy have been remembered at her funeral.

The worlds of the arts, journalism and politics joined forces to pay tribute to Ireland's national treasure, who died on Monday.

Her husband, writer Gordon Snell, brother William and sister Joan led hundreds of mourners including Oscar-winning actress Brenda Fricker, who starred in the screen versions of some of Binchy's books.

Father William Stuart told the congregation in her native Dalkey in south Dublin each had their own memory of the 72-year-old storyteller, saying in his homily: "There isn't a person here or beyond here who cannot recall her infectious personality."

Traditional Irish Music Workshop Announced for October, 2012 in the West of Ireland with John Carty, Arty McGlynn and Others - Yahoo! News

Connemara, Co. Galway, Ireland (PRWEB) August 03, 2012
Connemara Ireland Workshops is pleased to announce a 5-day /4-night traditional Irish music workshop for October 19-23, 2012. Hosted by and held at the award-winning country house, The Anglers Return, the workshop will feature some of Ireland’s most distinctive traditional musicians – including John Carty on fiddle and Irish tenor banjo, Arty McGlynn on guitar, Jimmy Higgins on bodhrán and Fiachra O’Regan on whistle and pipes. Guests will attend classes during the day, impromtu evening sessions as well as two house concerts – including a concert with John Carty, Arty McGlynn, Jimmy Higgins and friends – all in the comfortable surroundings of a wonderful historic country house just outside of Roundstone in Connemara. It’s an incredible opportunity for intermediate (or better) players on fiddle, tenor banjo, and/or guitar interested in advancing in traditional Irish music. Spaces are very limited, by design, to maximize one-on-one instruction and are offered on a first-come, first serve basis. 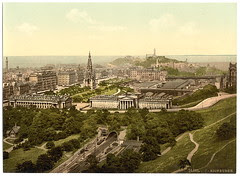 (Photo credit: The Library of Congress)Two kinds of Celtic music — domestic and imported —  were on display last night during a concert at the Meadowvale Theatre.
Fiona Cuthill and Stevie Lawrence, two veteran performers from Scotland who are in the midst of a North American tour promoting their new album, A Cruel Kindness, provided the imported Celtic, traditional folk music that is popular around the world.
Cuthill and Lawrence's new CD is nominated as Best Traditional Album for Scotland's national music awards.
David Leask, a native of Scotland who lives in Port Credit, provided the domestic portion of the show.
You can take the boy out of Scotland, but you can never take Scotland out of the boy.
“I think it influences my melodies,” he said before the show. “People have said that. It’s something I can’t get away from, whether it’s from your ma and dad sitting you on their knee as a child singing Coulter’s Candy.”
Leask's was accompanied by Sean O’Connor (flute, tin whistle, saxophone) and Steve Didunyk (piano and accordion).