Street musician guilty of mischief for cutting out his competition 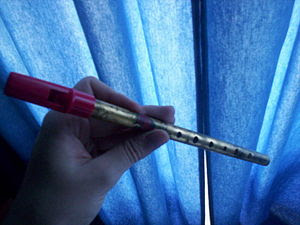 A street musician who cut the cable to a radio speaker in a Rideau Street underpass because he believed it interfered with his performance -- and then unsuccessfully tried to call the mayor as a witness in his defence -- was found guilty Tuesday of mischief.

Raymond Loomer, 47, was placed on probation for a year and ordered to perform 20 hours of community service after being found guilty of two counts of mischief under $5,000 for damage he caused to the underpass near the Rideau Centre.

Loomer, who has played a tin whistle in the underpass for 15 years, was charged last May after a section of the radio cable was cut and stuck to the office door of the Downtown Rideau Business Improvement Area, which has management responsibility for the underpass.

Ontario Court Justice David Wake also ordered Loomer to stay out of the underpass "unless engaged in the lawful pursuit of his profession as a musician or busker" and told him to stay away from the Rideau BIA offices.

However, the judge declined to order him to repay the damages since Loomer can't afford to cover the costs.

"You have to respect the property of others," the judge told Loomer while sentencing him, adding that he hoped Loomer's musical talents could be put to good use as part of his community service.

Loomer, who acted on his own behalf in court, argued he had no choice but to cut the wire in order to make a living.

"You have to hit the high-traffic areas. That area has acoustics, it has rolling sound," he said outside court. "I'm sorry I did it, but not only did I benefit, several guys had brighter Christmases."

Loomer subpoenaed Mayor Larry O'Brien in December to testify at his trial.

He said O'Brien told him the city-installed speaker was not meant to interfere with street musicians. The speaker is one of several measures designed to improve the underpass, once a popular spot for the homeless.

In a letter sent to O'Brien last month, Loomer wrote that the mayor had been walking through the underpass in April when he stopped and compared Loomer's music to that of the title character in The Friendly Giant, a long-running children's TV show. Loomer wrote that he pointed out the radio speaker and told the mayor it was interfering with his business.

Wake ruled that O'Brien and a city lawyer wouldn't have to take the stand to testify since whatever they would say wasn't relevant to the charges laid against Loomer.